This module abuses the Color Management classes from a Java Applet to run arbitrary Java code outside of the sandbox as exploited in the wild in February and March of 2013. The vulnerability affects Java version 7u15 and earlier and 6u41 and earlier and has been tested successfully on Windows XP SP3 and Windows 7 SP1 systems. This exploit doesn’t bypass click-to-play, so the user must accept the java warning in order to run the malicious applet. 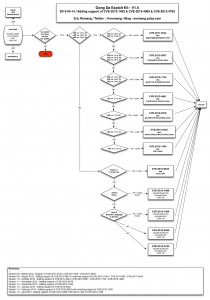 Less than 15 days after the release of Oracle Java CPU Special Update of 19 February, another Java 0day is reported exploited in the wild !

FireEye has report, in a blog post, the discovery of a new Oracle Java 0day targeting latest versions JSE 6 Update 41 and JSE 7 Update 15.

Symantec has report some connections through the new Oracle Java 0day with the Bit9 security incident. In the actual Java 0day security incident case, “appmgmt.dll” file, dropped by “svchost.jpg“, is detected by Symantec as Trojan.Naid. Trojan.Naid sample is connecting 110.173.55.187 C&C server. In the Bit9 security incident case, Trojan.Naid was also present and also connecting to 110.173.55.187 C&C server. Symantec detect this Java 0day as “Trojan.Maljava.B” and regarding associated threat assessment, less than 49 computers were infected and less than 2 websites were used in the watering hole attack.

Some security researchers are actually studying the sample, it is question of days before this 0day will be widely exploited.

We advise you to deactivate Java plug-in execution asap.