I can confirm, the zero-day season is really not over yet. Less than three weeks after the discovery of the Java SE 7 0day, aka CVE-2012-4681, potentially used by the Nitro gang in targeted attacks, a potential Microsoft Internet Explorer 7 and 8 zero-day is actually exploited in the wild.

First I would like to thanks the nice people (@binjo, @_sinn3r and all the guys of the Metasploit IRC channel on freenode) how helped me to understand and go further in my investigations.

Since the release of the Java SE 7 0day I was monitoring some of the infected servers used by the alleged Nitro gang (take a look at the updates at the end of the blog post). The 14th September morning, I discovered a “/public/help” folder on one of these servers, the Italian one (smile to @PhysicalDrive0).

As seen in the following screenshot, 4 files were hosted in this folder, and as a curious man, I downloaded everything to see what was related to these files. 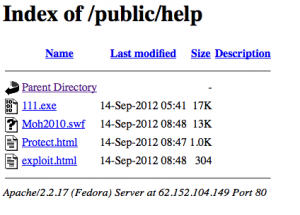 I tested these files on an up-to-date Microsoft Windows XP Pro SP3 with an up-to-date Adobe Flash (11,4,402,265). Surprise they dropped files on my test computer (See demonstration video here under) ! A new 0day ?  I decide then to take a deeper look at the grabbed files.

“exploit.html” is the entry point of the attack. This file creates an array of “img” and load “Moh2010.swf” Flash file.

You can observe that the file is packed by DoSWF and that it is decompress in the memory. After decompression “Moh2010.swf” file is spraying the heap and eval an iframe to “Protect.html” file.

The ActionScript embedded in the original packed SWF file, is also interesting, you will see some special encoding (Chinese ?).

This file, during exploitation is also checking if the web site is present in Flash Website Storage Settings pannel to no more load the “Protect.html” file. This mean, that once infected the user will no more be exploited despite further visites to the web site.

Display on the first visit

If you take a look at the source code, you can see interesting javascript code, how is manipulating the “img” array created by “exploit.html“.

You will also see that tests are done, in order to target Windows XP 32-bit and Internet Explorer 7 or 8. 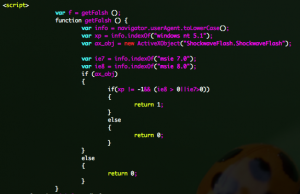 The guys how developed this new 0day were not happy to have been catched, they just removed all the files from the source server 2 days after my discovery. But also more interesting the also removed a Java 0day variant from other folders. 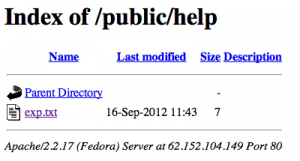 Also I submitted all these stuff to different person in order to confirm the strangeness of this exploit, and we got some good return.

Confirmed @eromang and @binjo are right about the bug. Not Adobe, appears to be IE: http://t.co/5lA7y33I

Metasploit team is planning to release an exploit module on Monday. This module seems to work very well.

Metasploit has release an exploit module “ie_execcommand_uaf“ and this module is working for IE 7/8/9 on XP/Vista/7.

AlienVault Labs has provide some additional information s regarding DoSWF file and the C&C server aka “12.163.32.15“.

AlienVault Labs has provide more details on the potential source of the attack.

It seems the guys behind this 0day were targeting specific industries. We’ve seen that they compromised a news site related to the defense industry and they created a fake domain related to LED technologies that can be used to perform spearphishing campaigns to those industries.

AlienVault Labs has report variant of the “Protect.html” file, named “Dodge.html” how is now also infecting Windows 7 32 bits running Java6 with Internet Explorer 9, and confirm the usage of the 0day in targeted attacks.

Microsoft propose a Fix it KB2757760 solution, “Prevent Memory Corruption via ExecCommand in Internet Explorer“, that prevents exploitation of this issue.

Microsoft has release the promised update MS12-063 in order to fix the 0day vulnerability. If you use Internet Explorer, I advice you to update as soon as possible !

251 thoughts on “Zero-Day Season Is Really Not Over Yet”