If you are working in computer security and still don’t have heard about the latest Adobe Flash 0days, aka CVE-2013-0633 and CVE-2013-0634, then you should change of job ! These vulnerabilities were found exploited in targeted attacks through spear phishing email messages targeting several industries including the aerospace one.

One of the e-email attached Word document was using the 2013 IEEE Aerospace Conference schedule, and another reported sample was related to online payroll system of ADP US company, to exploit CVE-2013-0633. I wrote a complete blog post regarding this campaign 2 weeks ago.

So as nobody as seen CVE-2013-0633 working outside a Word document, I will suppose that the vulnerability I discovered exploited in Gong Da exploit kit is potentially a fork of CVE-2013-0633 or could be CVE-2013-0634. Colleagues, you are welcome for comments 🙂

Here is the new code in Gong Da exploit kit.

This new version was discovered on “hxxp://www.jhtyhtrsgr.com/yymex/index.html” a web site how is actually still online.

“jhtyhtrsgr.com” is hosted on 69.197.61.29, in US and this domain name was created the 22 Feb 2013 with registration informations located in China and the following contact “jing yan ([email protected]) – GuangMing yanjing“.

The “index.html” file containing JavaScript code obfuscated by “JSXX VIP JS Obfuscator“, but traditional traces if this obfuscator are no more available. 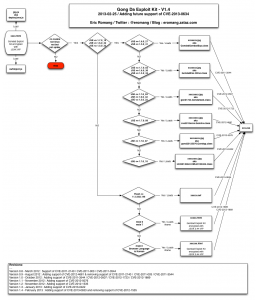