Tested on Windows XP Pro with :

This module abuses the java.sql.DriverManager class where the toString() method is called over user supplied classes from a doPrivileged block. The vulnerability affects Java version 7u17 and earlier. This exploit bypasses click-to-play on Internet Explorer and throws a specially crafted JNLP file. This bypass is applicable mainly to IE, where Java Web Start can be launched automatically through the ActiveX control. Otherwise, the applet is launched without click-to-play bypass.

Oracle has provide his Java Critical Patch Update (CPU) for April 2013 who has been released on Tuesday, April 16. On the 42 security vulnerabilities fixed in this CPU, 39 of them may be remotely exploitable. The highest CVSS Base Score for vulnerabilities in this CPU is 10.0.

This update fix the vulnerabilities exploited by James Forshaw (tyranid), Joshua J. Drake and VUPEN Security during Pwn20wn 2013. But this update is also fixing vulnerabilities reported by Adam Gowdiak of Security Explorations and other security researchers.

As you may know Oracle is using CVSS 2.0 (Common Vulnerability Scoring System) in order to score the reported vulnerabilities. But as you also may know security researchers disagree with the usage of CVSS by Oracle. Oracle play with CVSS score by creating a “Partial+” impact rating how don’t exist in CVSS 2.0, and by interpreting the “Complete” rating in a different way than defined in CVSS 2.0. 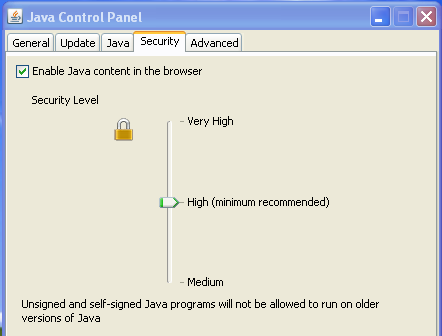 But, there is always a but with Oracle, they don’t seem to have enable, by default, the check for revocation using Certificate Revocation Lists (CRLs) despite that some bad guys are using valid stollen and revoked certificates to sign malware’s.

So we advise you to update asap, enable the CRL check, if you still have Oracle Java plug-in installed !