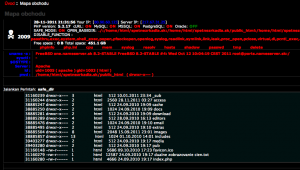 As you know, to exploit WordPress TimThumb vulnerability some extra technical infrastructure is required, such as to be able to create domain names or subdomains containing :

Isn’t it easy to create such domains or subdomains if you have own a Domain Name registrar !

Good news for every one, FileAve.com is finally down since the 18 October ! In July 2010 I have written a blog post on FileAve.com a free file hosting provider notorious for spreading thousands of malwares. FileAve.com have provide 50 MB free storage and a free sub domain for each created account (ex : http://yourname.fileave.com). FileAve.com was owned and operated by “Ripside Interactive, Inc.“, located in US, and more precisely by “Smith, Scott“, since September 2008. “Ripside Interactive, Inc.” was also owner of ripway.com, another notorious malware hoster.

With the data’s contained in our Honeynet database, I can provide you the following statistics. FileAve.com and associated subdomains were linked to 94 other malware spreaders, but FileAve.com was the most important malware spreader in this botnet. These 95 malware spreaders were regularly contacted, by 1420 other source IP addresses, but not known for hosting malwares, in order to attempt to infect new potential vulnerable web servers or computers.

The median lifetime of the 95 malware spreaders were 5 days, with 6 of them how have a lifetime above 1 year, and 2 of the 6 with a lifetime above 2 years. On the 1420 other source IP addresses, 754 of them were directly connected to FileAve.com IP address.

FileAve.com botnet golden age have occur between March 2010 and September 2010, with the most active malware spreaders ratio, with the most source IP addresses and the most generated events.

If you are interested in more statistics about FileAve.com activities, I have written an PDF available here. Also I have create a geographic time map of all activities generated by the FileAve.com botnet.

In a previous blogpost I have demonstrate that the WordPress TimThumb RFI vulnerability is used as a botnet recruitment vector. Since this blogpost 1 month has occur, and two and half months since our HoneyNet is gathering events about this botnet.

These 30 different domains are for now related to 370 IP addresses how are surely infected WordPress. Here a representation on how is linked to how.

Also you can find by clicking on the following link a geo localization time map of all the related IP addresses.

GUERRILA7  has report, the 20 October that a JBoss worm circulate to compromise servers running older version of the JBoss Application Server. The JBoss worm discovered by GUERRILA7 target Windows JBoss installation. CVE-2010-0738, published the 26 April 2010, concern a weakness in the default setup of JMX console (/jmx-console/) access security restrictions. A remote attacker could, without any login and password, execute commands in the JBoss running user context, through crafted GET or POST HTTP requests.

By doing some Google dorking, in order to find the original source code of the worm, I found some infected JBoss servers. You can find here under a dorking list how will provide you some of these affected servers.

Most of these dorks are present in JBoss status page and you can see some juicy commands executed through the “comment” parameter, like :

After some time, I found an affected Linux server how reveal the details of one of the “*.tar.gz” file, in this analysis “javadd.tar.gz“.

These file are part of Pnscan [pnsc] how is a multi-threaded port scanner with an extra capability to send and look for specific strings. These script need a compiler (gcc for Linux) to work. We will explain further how pnsc is used in the worm.

This file as described by GUERRILA7 is an IRC like script, but the connexions are done in HTTP mode on port 8080/TCP. The version I found contain more C&C servers, but actually all of them are down.

Owner of the C&C should have an nickname containing “iseee” to give orders to the remote affected JBoss server.

This script will act as the major injection and propagation code. First of all, if the current JBoss running user is root, the script will call “treat.sh” script. I will describe further the usage of this script.

“pnscan” will try to find “JBoss” in the response string after submitting a HTTP HEAD request to random destination IPs in /16 range. All the results are saved into this file :

After the execution of “sudoku“, the script open the results and try to find possible vulnerable targets how have return “JBoss” in response.

Here an attack is attempted by using the following payload (Source code), through another HTTP HEAD request to “/jmx-console/“. The decoded payload is a simple Java JSP backdoor form how allow command execution and result display (Source code).

Depending on the infection script the Java JSP script will be pushed into as “idssvc.war“, “zecmd.war” or “iesvc.war” on the server.

Once infected, the newly infected server will receive the order to execute “lindb.pl” through the Java JSP backdoor.

This script will be executed by “lindb.pl” and will try to download some additional scripts, not actually available, from some domains also presents in “fly.pl” script. But these downloads are done by a compiled C script, installed in the root directory as “.sysdbs” file and planned to be executed by cron at 01:01 AM the day 10 of the month.

So normally the 10 November at 01:01 AM the additional script should be downloaded by the actual inactive domains. I have analyze 4 Linux variant of these scripts and all have the same behaviors.